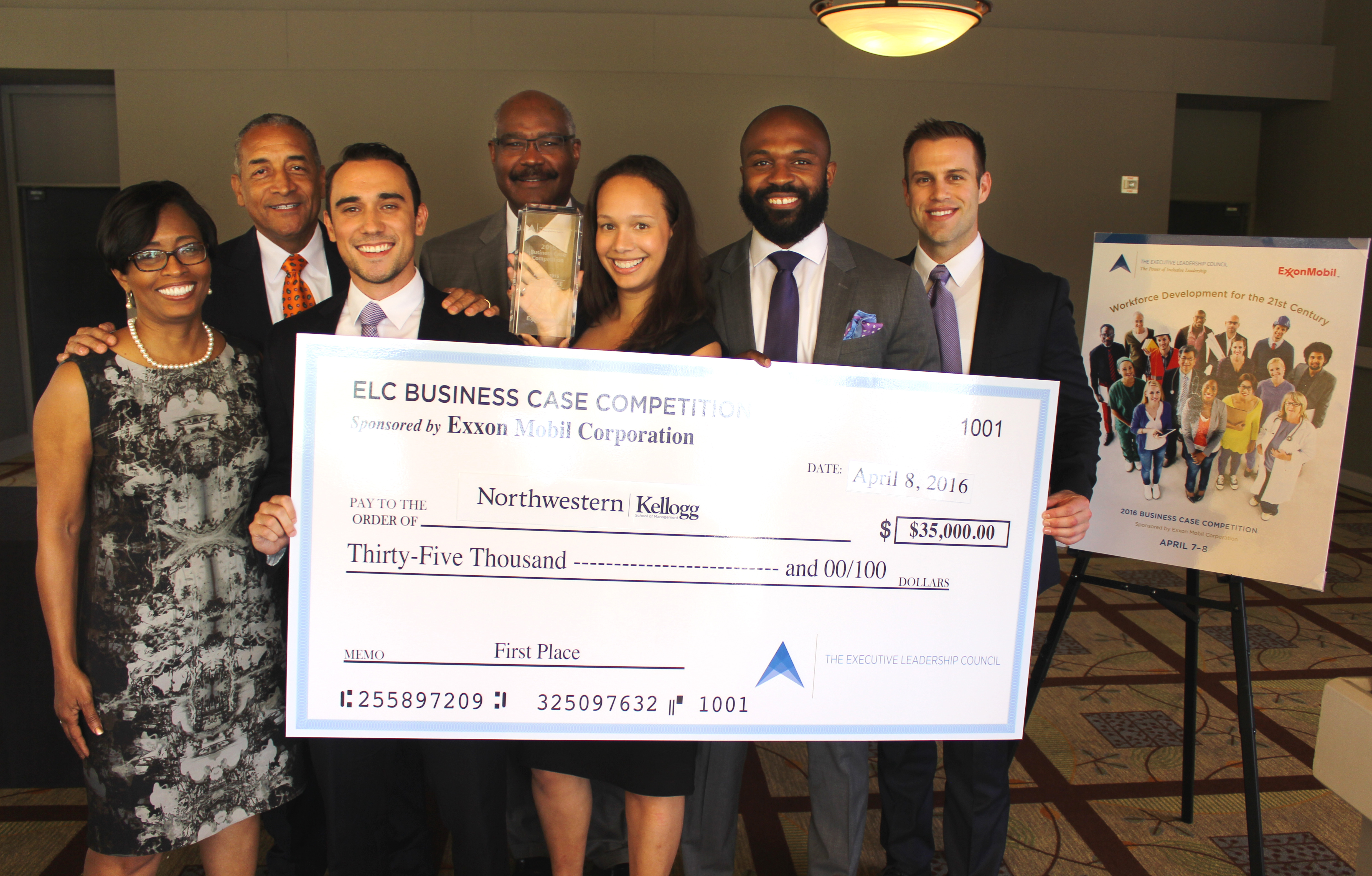 As we began our journey through the Executive Leadership Council Case Competition, our first step was to establish a strong, well-rounded team.

The competition centered on devising a talent management strategy for a F100 company, and as we discovered in our research, diversity of thought and cultural background correlates positively with a number of desirable business outcomes, including innovation. Although we didn’t realize it at the time, this would eventually become one of our greatest strengths. Across just four people, we represented the voices of several communities: African-American, Hispanic, White, Biracial, LGBT, Male and Female.

Our professional backgrounds were varied as well, spanning higher education, media and entertainment, human capital and financial services. Drawing from so many experiences created a wellspring of ideas. Human resource practices that were common and accepted in a particular industry were questioned by members of the team unfamiliar with the space.

We then drilled down into the motivations behind these policies and analyzed their effectiveness. In doing so, we began to formulate new strategies that represented the best of our respective experiences and would serve as the structural framework for our plan.

As explained in a recent article in the Wall Street Journal, titled How to be Creative, “big breakthroughs often depend on the naive daring of outsiders. For prompting creativity, few things are as important as time devoted to cross-pollination with fields outside our areas of expertise.” We’d love to say that we were following this formula, but in reality the team was formed based on genuine friendship and mutual admiration of the intelligence and work ethic of the other group members.

Researching and subsequently writing our paper was incredibly rewarding. Not only is talent management a particularly compelling topic as it pertains to the corporate landscape, but it is also a subject that as a group we have grown passionate about. Said passion was only fueled by the guidance and expertise of a fellow teammate who had previous experience in an HR role, and thank goodness he did.

Two themes were incredibly important in researching and writing this paper throughout the duration of the competition.

A real breakthrough we experienced was when we determined the framework that our talent management strategy would be built on. Each individual took ownership of a section of our talent management house, and that allowed us to become subject matter experts in a certain area (aka nerd out).

What this competition came down to was that we took it seriously, but we had fun. We dove into the subject matter. We found hard evidence supporting our hypothesis, which was that diversity and cultural inclusion were central themes to talent management and needed to be at the forefront of any talent management strategy for corporations going forward in this increasingly global business landscape.

We’d done our research. We’d put pen to paper and come up with a cohesive, unified approach to talent management. We’d taken the separate streams of thought of four individuals and morphed them into a single story. And then, we sent in our submission and waited.

Weeks passed, and we were distracted by the day-to-day of being students: term papers were due, studying for and then taking finals, and finally Spring Break! We headed our separate ways across the globe, only to be brought back together electronically with the news that we were one of the three finalist teams in the competition. We were thrilled, but we also knew that we had a lot more work to do. In the next four weeks (two of which were spent internationally vacationing with friends and loved ones), we needed to transform our research paper into a 45-minute PowerPoint presentation, as well as practice and deliver the presentation in an engaging way.

By the time we got back to Evanston, we had framed the high-level presentation, keeping in place the framework from our original paper. We met three times that week to focus on fleshing out the details in a thoughtful and substantive way (we were later told by the judges that these details mattered).

We planned for a logical thought order to the presentation and made sure to build in statements that supported one another.

We created one central theme and revisited that theme in each sub-section to make sure that the audience knew where each point fit in the overall framework.

We spent quite a bit of time ensuring the slides were attractive, but not distracting, as we wanted our presence to be the focus during the presentation.

Finally, by the Sunday of the competition, we had the materials ready.

The final week was just as busy as the previous week had been. We again met three times to practice and rehearse the presentation. We each had different styles — some used cue cards, some followed the language of the report, and others practiced using the slides themselves — but at this point, we knew the material well enough to be confident in our presentation. It was a matter of polishing: choosing the language for specific points we wanted to convey, practicing the transitions between the group members, and of course, making sure that we had the timing right. We added in a few “extras” here as well; one team member had the idea to print out executive summaries for the judges, which were well received at the formal presentation. We practiced a couple of light-hearted jokes that would fit with the material while allowing us (and the audience) to have fun. By the night before our trip, we were ready to go. We each got home and tried to get some sleep before our 5 a.m. cab to the airport.

Houston, We Have Lift Off

And off to the airport we went. Passing coffee around the cab, we were tired, anxious and excited all at the same time. We had done what we could with the last two weeks and knew that now it was about impressing the judges and nailing the presentation.

As soon as we landed Houston, it was time to be “on.” Not only are case competitions great ways to research real-world business problems and win a nice paycheck, it’s also an opportunity to network for the future, with the company(ies) hosting the competition, the judges as well as the other teams.

Our first day was filled with a lunch — hosted by Exxon and The Executive Leadership Council — with the other two teams and a tour of the new gorgeous Exxon campus. Upon arrival we were a bit alarmed to learn that one of our final round competitors was a returning finalist from the previous year who knew the judges and company well. However, we couldn’t let that discourage us. We put on our Sunday best attitudes and prepared to wow them with our professionalism and fun spirit.

First impressions are critical, and we wanted to make sure they knew each of us and liked each of us. No matter how great a presentation is, if they don’t like you they aren’t going to buy what you’re selling.

At the end of the night, we met up in one of the hotel rooms to gorge on room service, sing Justin Bieber and practice our presentation before heading to bed.

We woke up and the day had finally come. We were lucky enough to have been slotted last to present. Exactly what we wanted. This gave us time to attend the opening ceremonies, enjoy a hearty breakfast in the hotel restaurant (bacon is the key to success), and do one final run through of our presentation. While it’s nice to get it done and over with early on, do not underestimate how extra time can help you and your presentation.

Now it was time to go in.

Time to face the music.

Time to take that big check home to Kellogg.

Prior to the opening ceremony we had a chance to view where we would be presenting and map out where we would stand. The projector was in the middle of the room, with the judges’ seats on the right and a smaller open space on the left. We chose to stand to the left, away from the judges. We believed this would give us the opportunity to face diagonally towards the judges so our backs would never be at them, but we could also turn and point to the projector when needed. We had debated having some members stand on the right while they weren’t presenting and the presenter standing on the left, since it was smaller, but thought crossing the projector to hand off the clicker would make our transitions less smooth. Ultimately, the judges didn’t fault us for standing on the left, but noticed that we did seem a bit cramped and questioned why we didn’t stand on the right. While we believe it’s vital to have a plan, we don’t think one should put too much emphasis on where exactly the judges want you to stand. We stood on the left because it made us feel comfortable and confident. Those are the keys to success. Not your position next to the projector.

It was now presentation time. We knew our material. We had practiced enough to be comfortable, but not so much that it sounded like rote memorization. So now it was time to employ our three presentation must-dos:

Don’t forget to say thank you. Whether you win or lose, people put a lot of effort into creating and managing the competition. If you’re smart about it, you learned and grew through the process. And that deserves a thank you.

Alicia Luchetti is a licensed California attorney and joined Kellogg’s Two-Year MBA program after four years in sales and marketing for legal service companies. This summer, she will be joining Intel as an Accelerated Leadership Program intern. Long term she hopes to do global corporate strategy and mergers & acquisitions for a company in the San Francisco Bay Area

Anthony Gonzalez joined Kellogg’s Two-Year MBA program after working five years in advertising sales and operations within the media and entertainment industry, most recently with About.com. This summer he plans to build on his business development skills while working for a small startup in the New York or Chicago area. On-campus he serves as Co-President of the Hispanic Management Association and is Co-Chair of the upcoming 30th Annual Black Management Association Conference.

Jason McCoy joined Kellogg’s Two-year MBA program after six years of working as a recruiter in the financial services industry, most recently for State Street Corporation. In line with his professional interests of consulting in the human capital space, he will be joining the Boston Consulting Group’s Los Angeles office for his summer internship, with a focus on their People and Organizations practice. On campus, he is a member of Pride@Kellogg, a Kellogg tour guide, and loves participating in case competitions.

Adjatay Nyadjroh joined Kellogg’s Two-Year program after nearly eight years in financial services with Brown Brothers Harriman, FactSet Research Systems and Natixis. Adjatay most recently worked in sales prior to coming to Kellogg and this summer will be joining the BCG Boston office as a summer consultant. Long-term he hopes to develop industry expertise in the retail and human capital space. Adjatay currently serves on the executive board of the Black Management Association.